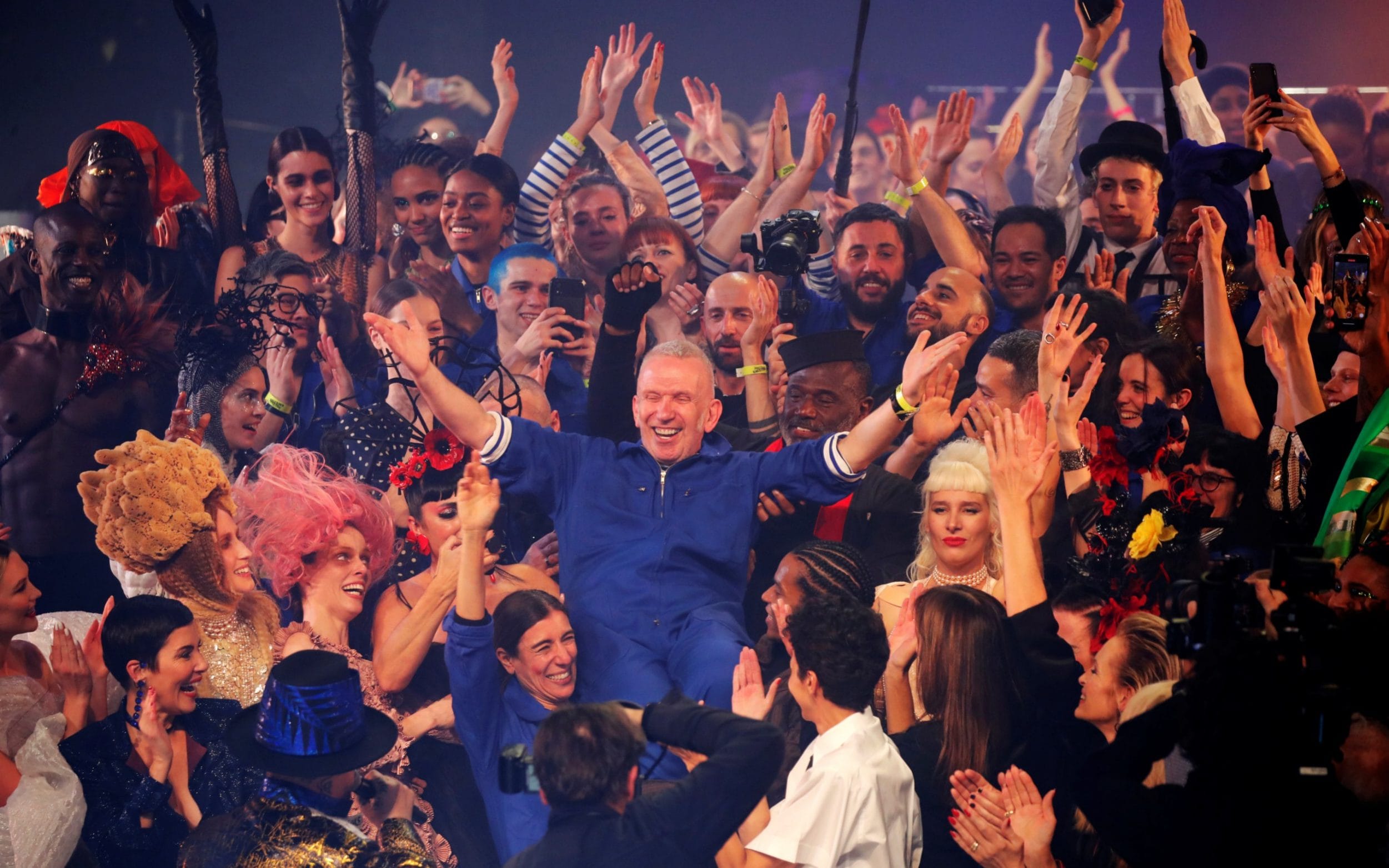 This week in Fashion, Jean-Paul Gaultier retired from the catwalk with a spectacular show in Paris.

He made sure to leave us with a message on sustainability.

“There are too many clothes and too many that are never worn. Don’t throw them away, recycle them,” he said, declaring his final collection was his first “upcycled haute couture” one.

“When I was a child my mother told me how she would turn my father’s old worn trousers into skirts. That marked me. You can love a garment again by transforming it,” Gaultier said.

“I have been doing that since… In my first show and in this my last there are creations made with the jeans I’ve worn,” he said.

“It’s the most beautiful of materials. Like a lot of humans, it becomes even more beautiful as it gets older.” (France 24, 2020)

As a matter of fact, JPG has always practiced what he preaches as many of his creations were unique pieces, a combination of up-cycling, reinventing and re-purposing. It all began in his childhood, when JPG made clothing for his beloved teddybear, who is oftentimes the star of his fashion exhibitions.

In fact, I had the chance to visit his exhibition in Munich a few years back (I reported on his front row guests on Fashionblogga) and was amazed by how much craftsmanship, creativity and play went into his creations.

The international traveling fashion exhibition ,From the Sidewalk to the Catwalk’ was touring since 2011 and came to Germany as a last stop, to the Kunsthalle of the Hypo-Kulturstiftung in Munich.

Our curatur told us at the exhibit, that Jean-Paul Gaultier never had formal design training, and therefore was very free in how he chose to use materials, experiment and make unusual garments by hand – something he is now famous for. Hand-craft and craftsmanship are really the basis of sustainable luxury fashion and should be celebrated much more in the future.

Below I am sharing some (slightly pixelated) photos and information with you, where you can really appreciate his way of material use.

JPG hand-crafted collection inspired by religion in 2007 (read more about it on Vogue.com.)

JPG collection inspired by religion, lace and sanctity in 2007:

The camouflage tulle dress  from the ‘Dubar’ collection.

Sarah Jessica Parker wore this tulle dream in 2000 at the MTW Awards in New York:

Camouflage dress with strings of beads:

A handbag inspired by palm leaves:

A parasol with strands of real hair from the 2001-2002 Haute Couture China and Spain collection:

Collection “Les Rabbins chics” (Chic Rabbis) 1993/1994 which was of course quite controversial:

The catwalk, a moving installation within the exhibition:

No animals were harmed when creating this dress:

This rare animal skin is completely made out of hand-stitched beading!

Inspired by Inuit and ethnic clothing, another masterpiece:

The front and back of the dress which Conchita Wurst got to model on the catwalk for JPG. He was one of the first designers, very much ahead of his time, to include transgender models, models who did not fit the beauty standards, had varying proportions and looks.

JPG’s original sketches of the stage costume for Madonna with conical bra elements:

EW reports: “Madonna birthed a major fashion moment when she performed in a pink cone bra corset in Chiba, Japan, on April 13, 1990—the first stop on her Blonde Ambition Tour. Created by French designer Jean Paul Gaultier (first seen on his runway in 1982), the controversial concert outfit was inspired by 1950s bullet bras and ‘80s underwear-as-outerwear street style—a show-stopping combination that played to Madonna’s counterculture sensibility.”

Stage costumes and movie costumes – something little known about JPG. He is has been very engaged in cinema and stage productions and it is rumoured that he will continue to be creative in this area. As The Guardian reported:

“In filmic terms, Gaultier is probably best known for designing the hyper ostentatious garments in The Fifth Element, Luc Besson’s futurist sci-fi in which Bruce Willis helps subvert an alien invasion. (…) As well as being sensational, his designs perfectly matched the absurdity of Besson’s characters and instantly stamped the gulf between their lavish world and that of Willis’ downtrodden cabby. Gaultier had been displaying similar playful effrontery on catwalks since the late 1970s, with several pieces in his 1985 ‘And God Created Man’ – in which Gaultier introduced the male skirt – being instantly recognisable in The Fifth Element.”

How sad that he is no longer going to create those masterpieces! I grew up with Jean-Paul Gaultier, the sailor shirt and his appearance on the cult show “Eurotrash”. His first perfume which looked like a rosé female torso and was packaged in a  tin can was one of the first prized perfumes I bought and in 1994, while on holiday at the Côte D’Azur, it was his Tibet collection in a French fashion magazine that made me want to become a fashion designer.