Everyone is talking, tweeting, instant’ing and writing about the Dolce & Gabbana ad campaigns which sparked outrage in China and an outcry in the rest of the world. 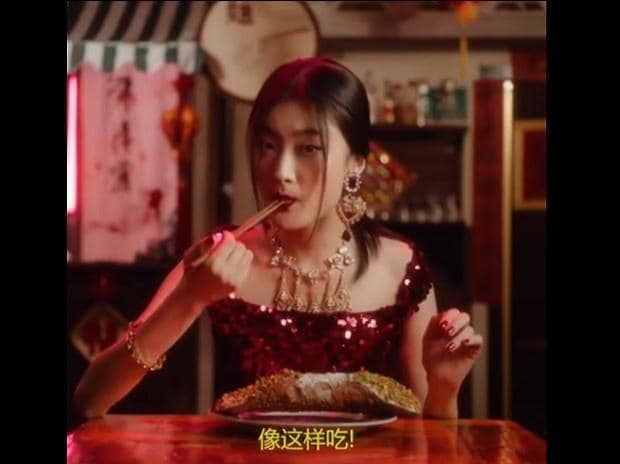 Let me take you on a journey to explore whether this ad was racist, provocative (on purpose) or just ethnocentric.

Racist: One definition of racism is “prejudice, discrimination, or antagonism directed against someone of a different race based on the belief that one’s own race is superior.”

This would mean that D&G implied that Italy and the Italians are superior over China. Is this what the semiotics of the ad reveal? The food is there, Italian food, some of it like the Pizza and Cannoli dessert in overly large sizes. The model is Asian (it has been pointed out she might be Korean and not Chinese), the subs are in Chinese, the room is perhaps meant to look Chinese and yes, those chopsticks are probably Chinese (although they are used in other Asian cultures, too). If one wanted to perceive the ad as racist, as many people have, one would say it is mostly the derogatory instructions issued by the voice-over and the model’s clumsiness at eating the foreign food which makes this ad offensive. Does it really imply that the Italian race is better? Does it really imply that the Chinese race is worse? Does it discriminate? – Many Chinese thought so. As Fashion United explains:

“While it was no doubt intended to be tongue in cheek, a brand the size of Dolce should know when to exercise humour and when to err on the side of caution. The controversial ads depict a beautiful Chinese woman, bedazzled in D&G jewellery, using chopsticks to eat pizza, spaghetti, and an oversized pastry called cannoli. She awkwardly struggles at times, reports Quartz, and in the cannoli video the narrator asks the giggling actress in Chinese, “Is it too huge for you?” Dolce & Gabbana labeled the series “Eating with Chopsticks,” and tagged each of the ads with #DGLovesChina and #DGTheGreatShow.”

Shall we all jump on the racism bandwagon?

Provocative: D&G is known for provocative ads which certainly made some people uncomfortable. However, this is a common trade of the advertising industry and most certainly the fashion industry. Sex, drama and weird innuendos get our attention in a media message overloaded world. Fashion in particular, has a close relationship with pushing and crossing all boundaries of social decency.

In fact, there is a history of provocative ads by the D&G brand and it has become somewhat of their signature style. Similar to fashion brands like Diesel, Levis or even Tom Ford, there are endless examples where fashion brands overstepped comfort zones on purpose and without any remorse, just to be talked about or even banned by some advertising watchdogs.

The Dolce & Gabbana – Light Blue Fragrance summer commercial – is again highly sexualized and gives several crotch shots of a male model who is pursued by a woman with a dive through the ocean just to start wildly kissing the man.

There is a winter version of the ad, too: David Gandy & Bianca Balti in the D&G Light Blue Winter 2016 campaign are half naked, making out in the snow covered alps to Italian classical music.

The campaign with the hashtag #DGMilano will show you a handsome male model hugging two girls in hijabs and another one snogging a girl in a passionate embrace.

Another ad shows Game of Thrones’ star Emilia Clarke enjoying herself in an Italian carneval-festival-style setting and – wait for it – eating spaghetti. The soundtrack to this ad alone is very controversial: “Tu vuò fà l’americano” – which translates as “You Want to Be American” is a Neapolitan language song by Italian singer Renato Carosone from the 1950s. It is essentially a criticism of a post WWII Italy and the Americanization of the country. Is it anti-American?

#DGBeauty also shows Emilia Clarke giving a testimony on how much fun she had working with the creative team: Matteo Garrone and the Morelli Brothers. Apperently it is”beautiful, wonderful, the shoots are so much fun and “it’s so Italian and fun and authentic and real and honest!”

And here are a few important clues: The Morelli Brothers who make things very Italian and honest. In fact, the brothers have been responsible for other campaigns which had less of a “sh**-storm” on social media but were just as controversial as the China ads. They did one for Mexico, entitled  #DGLovesMexico. Mexicans were offended how they were stereotyped. The ad was all the clichés of Mexico plus good-looking models.

Prior to that D&G loved Hong Kong and also Beijing in a stereotypical way, showing what possibly ignorant people think of the country.

But D&G also made fun if its own country, and all the stereotypical things about it, in its 2016 campaign #Italiaislove. There are nuns and priests, spaghetti, coffee, chubby stereotypical “mammas” and all the rest of it. Was it racist? No, D&G was laughing about itself.

D&G also did a campaign on Venezia, using the stereotypical tourist attractions and settings, including tourist paraphernalia stands and dirty pigeons. #DGVenezia is still a very beautifully shot campaign. 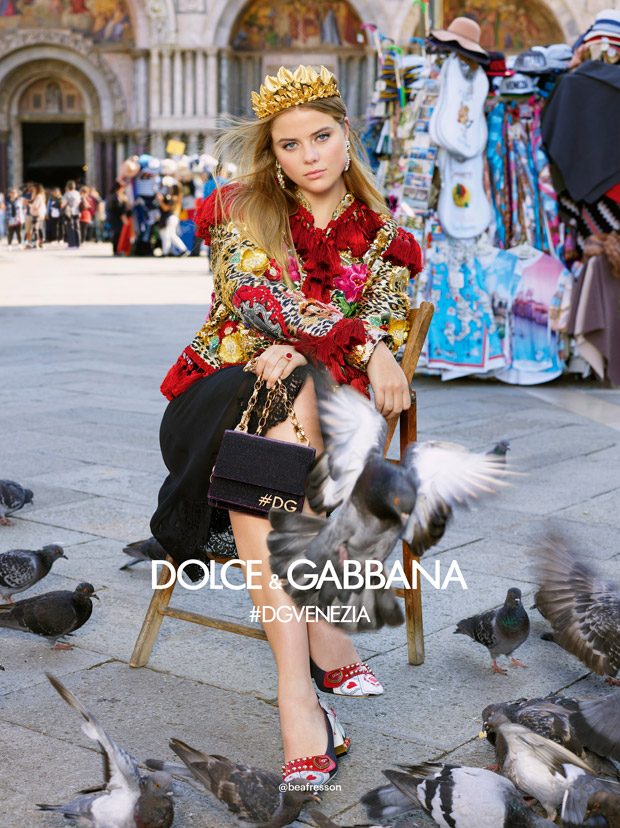 In fact, Europeans like to be tongue-and-cheek and laugh about themselves, express sarcasm and provoke. Do you remember Jean Paul Gaultier’s show Eurotrash? It was soooo trashy, bad, cheap, derrogatory and sexually inappropriate and my generation loved it! Below is an episode which is rated 18 so only watch it if you are!

Eurotrash made fun of other European countries, it is dirty and stupid and ridiculous – and is very much a type of European humour. One of the very successful trashy episodes “confesses” that the English don’t like the French, and vice versa, and this is why the French government wants to culturally sabotage them.

Ethnocentric: The above paragraph brings me to the last option. Was D&G’s advert simply ethnocentric? (And that is not an excuse but rather an analytical thought). Any country can be accused of ethnocentricity. It means “believing that the people, customs, and traditions of your own race or nationality are better than those of other races” but it is not necessarily racist. Ethnocentric behaviour is therefore not the same as racism or patriotism, although it’s often found alongside both of these. Ethnocentricity compares people to outsiders by using the cultural norms of their own group so one can believe that (and lets face it, many nations do just that) but not act out the sentiment. (If you are making fun of yourself, then you are perhaps a sarcastic ethnocentric.)

However, this can become an instant problem if this is your business attitude. So if Europeans make fun of each other, well, we are almost immune to it as we can go back centuries of doing just that. It is a geographical area densely populated by varied cultures who like to pull the leg of their neighbour.

And as we see here quite clearly, when you are trying to break into a foreign market and appeal to foreign consumers, not researching their mentality meticulously and not respecting their cultural norms can become a massive problem in the time it takes you to say fire the marketing manager or business etiquette faux pas. And this is what seems to have happened here. D&G’s creative team continued to use the same European, ethnocentric, tongue-and-cheek approach to advertising and brand communication in a very different market, a very different cultural setting and with a big poo poo storm as a result. It seems that someone in the marketing department didn’t spend time and money to consult an intercultural expert when creating the campaigns but perhaps now they will.

I agree that the campaigns were not suitable for their purpose and that many people felt offended. However, after my research, I see that D&G is capable of laughing about itself and stereotyping itself just as much. Just look at their very old Sicily commercial showing a stereotypical funeral! (Domenico Dolce was born in Sicily.)

Once dubbed the “Gilbert and George of Italian fashion it’s a fashion brand which is not known for practicing political correctness or being sensitive to cultural differences, quite the opposite.  (And if you know about Gilbert and George, it all suddenly makes sense!). The question is then: Can a brand continue to live with this brand identity in a globalized and connected world? Or does it have to change and reevaluate its brand DNA? Will an apology make things better or worse? Can the Chinese public forgive them? Should they forgive them?

In fact, Chinese politicians expressed that this was not a diplomatic scandal which makes sense as bilateral relations between China and Italy date back to Imperial China and Ancient Rome. The two countries are working on joint military operations, so how can fashion get in the way?

-> Want to explore this some more? There is an interesting “insider” view on the entire scandal by an anonymous model which you can read on Dazed. <-

And if you have an opinion to share or questions to ask, please post below – I am curious to hear your comments!